Disclaimer:  The following review is based upon a mid-packer, slower, 40-something runner who actually went to this high school.  So, not very objective IMO; your experience may vary (dramatically).

As always, THANK YOU to my husband George for being my support and cheerleader and to Coach Jennifer Lynn of Desert Endurance Multisport Coaching for being patient, kind, and getting me ready!

Back to SCOOL (What can I say? I’m a product of the TUSD system)

My high school years were anything but illustrious.  Acne, teenage angst, general awkwardness, and big hair really cramped my style, not allowing my inner Cyndi Lauper to emerge. Other than hanging with my horses and watching Knight Rider (David Hasselhoff as Michael Knight was totally rad!) my high school years were, well..awful. As my Dad puts it, I was enrolled in high school, I didn’t actually go… So, when I say I went to Sabino High School, you’ll have a better idea of what really went down according to my fater. I will say that my perceptions differs quite a bit when it comes to this. 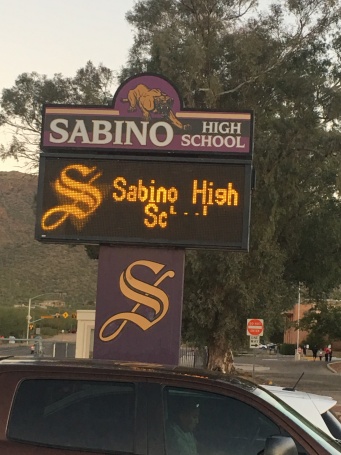 So how fun for me to return to my old alma mater for the Everyone Runs TMC Veterans Day Half Marathon, 1/4 Marathon, & 5K because I enjoyed it SO MUCH the first time (emphasis and sarcasm is all mine)!  Seeing as how I never actually went to school (you know this is an exaggeration right? Well, kinda…) I had to remind myself of the way; not really, as I only live about a half mile away from this public establishment of finer education.  The proximity to my house, the course that runs through my ‘hood, and a chance to relive my high school years was a no brainer for the decision to run a race here at the home of the SABERCAT!  (What’s a Sabercat? Really good question and one I’ve pondered myself from time to time.  My best guess: An abbreviation of Saber Tooth Tiger).

Sabino High School senior picture circa 1990.  Notice the Teased Bangs, trademark of the 1980s. Apparently, I decided to keep the trend alive going into the new decade.

Generic, obligatory yearbook entry that pretty much sums up my Sabino High experience. Have no clue what F.E is or why it was demented and pathetic.

Expo/Packet pick-up:  No expo. However, packet pick-up was very convenient at Fleet Feet locations, one of which being on my end of town (thank you race management!). Volunteers were nice enough, and the pick-up was well organized.  Kinda strange not to be given a t-shirt at packet pick-up, but was instructed I would be given the t-shirt at the finish line (picturing myself grabbing a shirt of of a bin as I blaze past). There was a goody table where I helped myself to free samples of sunscreen, energy beans, and lip balm.  Hey, this girl can never have enough lip balm!

Parking/Access: Both North and South parking lots of Sabino High were available for parking the morning of the race.  Both were well manned with volunteers.  We arrived at 6:50am and there was still plenty of parking.  Easily to leave once race was over too. Much easier actually than when I actually went to school here.  Maybe we should have had volunteers directing traffic then too.

Even though I’ve seen this view for the majority of my life, I can’t help but think how pretty the sun on the Catalina Mountains is at 7am.

Starting Line at daybreak.  I think there’s a country song somewhere out there with these lyrics.

Cost: I paid $45 in September for the 1/4 Marathon, which got me a medal, tech long-sleeve tee, and breakfast burrito (which I didn’t eat).  I had no travel cost, so overall a pretty good deal.

Weather: The weather was beautiful and reminded me of why I live in Arizona!  About 64 degrees at the start of the race, no breeze and not a cloud in the sky.  Perfect!

Pre-Race: Timing chips (house-arrest- style ankle bracelets) where distributed in a tent near the starting line.  Quick and easy.  There were a few vendors like Don Fernando Coffee and Ragnar around the pre-race congregation, along with a jumping castle for the kiddos. Since it was Veterans Day Weekend, there was a very patriotic and awesome color guard, and a not-too-shabby singer of the Nation Anthem. The starting line was on the school track, which was a complete novelty as I never did any kind of sport or physical exertion while in high school. The half marathon left approximately 5 minutes before our group did at exactly the advertised time. As I stood at the starting line, I looked over and standing next to me was a former colleague.  Small world!

Course: The course took us around a residential area, my neighborhood to be more specific. I actually ran the course prior to running the race, so I felt confident about the course at least.  At any rate, the course started at Sabino High School, took a lap around the track, then went out the gate to Bowes Rd.  Check out the following to get a gist of the scenery along the course:

For being in this area of the foothills, the course was surprisingly semi-flat. Since this is my neighborhood and I’ve lived here the majority of my life, the scenery is really pretty vanilla to me.  Although I will admit the mountains looked pretty spectacular with the sun rising. Oh, and there were two “bands” playing music– one at the start of the course and one mid-way through. Water stations were every couple miles and the course was well marked.  As always, law enforcement did a great job stopping traffic and keeping everyone safe.

Post-Race: I usually don’t (can’t) eat after a race, so I didn’t partake in the food.  It looked good and plentiful, however.  There were also massage tables (also didn’t partake).  There was plenty of seating and people seemed to be enjoying themselves.  One thing I didn’t mention was the bathroom/porta-potty situation.  As the start (and finish) of the race was on school grounds, the bathrooms were opened for our use, and how sweet it was!  I will always avoid porta-potties like the plague, which incidentally they probably carry, so having actual bathrooms was AWESOME!

Obligatory post-race picture of ME, ME, ME: The only athletic event I’ve ever done at this school.

Swag/Bling/Shirts: Since I only run these things for the medals, I was happy that finishers received one, but was slightly disappointed to see it was a generic medal with runners and a sticker (I think) of the race name and the American Flag.  Really nothing special.  On that note, the shirts were pretty average too.  I’m not a fan of white shirts and disappointingly the shirts were white (read: see through) and long-sleeved (also a frustration because there are all of five days of the year we Arizonans can were anything with long sleeves). They were a tech fabric though which sorta redeemed the long-sleeve decision of the race management. I liked the bib as it had an eagle, flag, and my name (let’s face it, we all like to see our name in print). No other swag, except the free lip balm at packet pick-up. 😦

Overall I liked this race and would attend again next year.  It was well-organized and well-thought out.  The course was marked clearly and supported well.  Pre-race communication was adequate, as was the medal/shirt. And it was ULTRA CLOSE to my house. BONUS!

***Addendum:   We were “notified” (via Facebook– not such a good choice IMO) that the course had been mis-measured and the Half Marathon was actually 12.66 miles and the 1/4 Marathon was actually 6.2 miles (so said my Garmin too).  Most people were understanding and pleasant, but there were a couple of people who were upset, even though management apologized profusely.

Due to the race location, well-organized race, awesome management/ volunteers, available parking, adequate medal, and overall good vibe, this race earns four and 1/4 (get it?) out of five Sabercats: