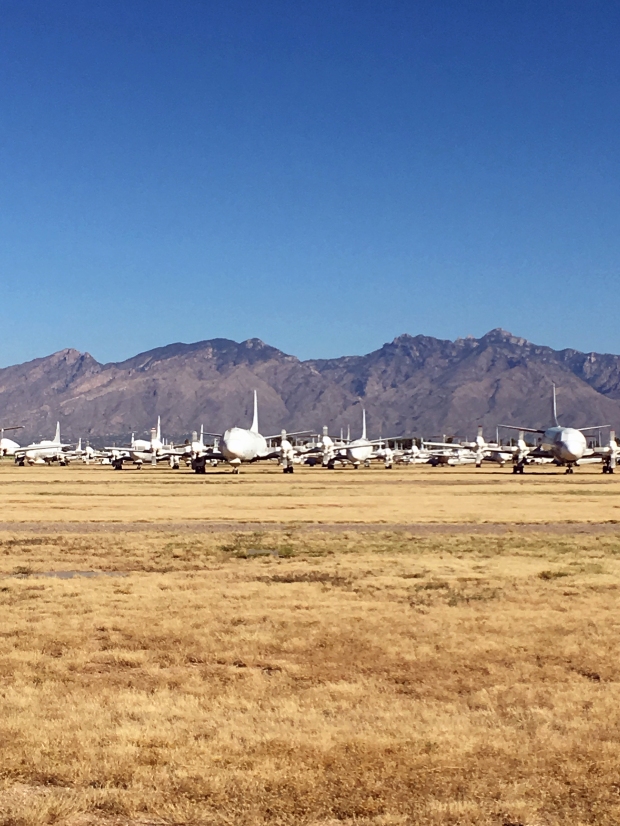 As a Native Tucsonan, I have passed by what we locals refer to as the “Airplane Graveyard” maybe a thousand times and it’s always held an air of mystery to me, especially after it was showcased in the 80’s Film “Can’t Buy Me Love” which was filmed in Tucson. Although not an airplane enthusiast (in fact a nervous flyer!), I do very much appreciate airplanes in general.  I mean, how is it that something can weigh a gazillion tons and stay in the air held up by only the laws of physics? Pretty cool, really. Also speaking of 80’s films, I think I fell in love with bad-ass, too-cool-for-school aviators and their jets after watching TOP GUN. I must have had a crush on Tom Cruise (Remember Maverick?) for most of my adolescence (and 20s if I’m being honest).  In all seriousness however, I very much appreciate our military and 100% of the proceeds from the race support military families (http://dmforcesupport.com/DesertBoneyard/New%20Site/index.html). So, when I saw this race advertised, I thought it might be fun to go!

According to http://www.airplaneboneyards.com/davis-monthan-afb-amarg-airplane-boneyard.htm, the DMAFB Boneyard is the largest military aircraft storage facility in the world and was started after WWII.  Check out the website for more pics, especially the arial views which put into perspective how big this part of DMAFB really is!

Expo: None and I didn’t expect one for a race of this size. Packet pick-up was held at Fleet Feet on my side of town (thank you race directors!) Friday afternoon.  Of course, the location of packet pickup was fantastic and not having to drive to Oro Valley was greatly appreciated!  Race volunteers at pickup were friendly and efficient.

Parking/Access: Having never been on any military installation before, I thought it was pretty exciting to be entering through an official Base Gate.  As one might expect, it was staffed heavily with armed military personnel.  I can also safely assume that this will probably be the only time my car will be inspected by a dog before a run a race.  Parking was aplenty, with efficient volunteers directing traffic.  Parking was in a field near the entrance gate, therefore somewhat a long walking distance from the starting area. It didn’t bother me, but I did pick up some nasty goathead stickers in my shoes walking in the dried grass (gaitors maybe?–more on this later).

The Course:  Flat with aircraft galore!  The course is a mixture of paved roads and dirt service roads which intertwined/wound between the rows of aircraft.  The dirt roads were very well marked with cones and volunteers. One thing about the dirt roads, I picked up several rocks and lots o’ dirt in/on my shoes.  Some of the debris rubbed blisters on my feet and ankles, so I would probably were some sort of gaiter if I were to do this race again.  The course also gave great opportunities for photos, which many participants were doing.  I appreciate the race directors actually allowing participants to see a great variety of aircraft throughout the entire race; it was really a treat for we non-military to see. Check out the following for my cool photo-ops:

Oh yeah! Look who photobombed my selfie–  Photo with Maverick! 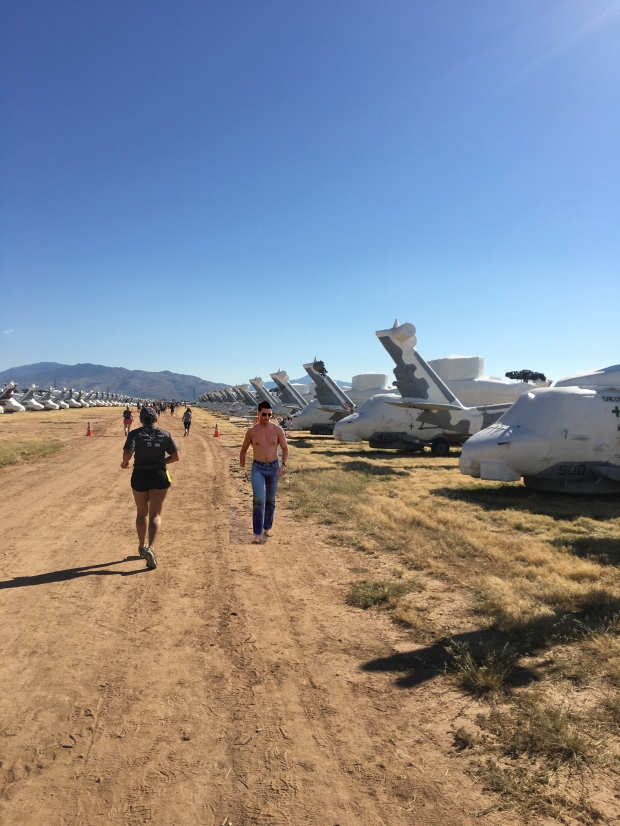 Maverick decided to join the race.  Without a shirt.  Of course.

Like I said, it was really a cool course with lots of cool photo ops.

OK, so one draw back of this race was the weather and absolutely out of the control of the race management.  In fact, the weather lately has been (very) unseasonably warm, with temps reaching into the mid-90s.  It was no different race morning.  Mid race it was 84 degrees, which to me is too hot, and also partially explains my 11:20 pace!  I’m more of a 60-70 degree runner, which makes AZ not a very prime location for me to run 8 months out of the year.  Anyway, I was feeling the heat around mile 4, as was most other participants who were still on the course at that point.  The follow pic sums it up nicely: 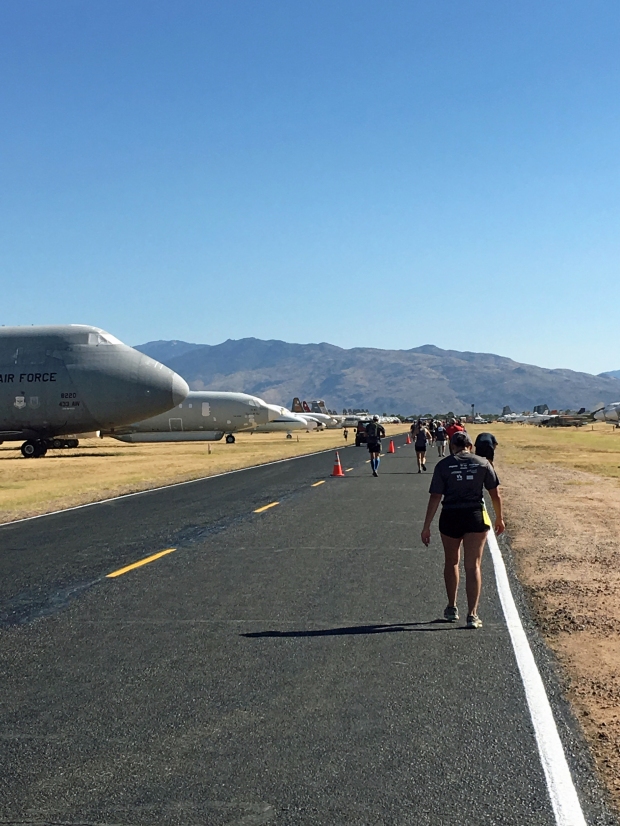 Notice the guy throwing up on the side of the road.

That being said, there were four strategically placed, well-staffed water/aid stations throughout the race. Two (?) of the aid stations had porta-potties.  Volunteers in Gators were continuously driving the course and plenty of other volunteers were standing along the course offering encouragement and support.  Overall, a really nicely supported race. Volunteers were handing out water at the finish line and there were tents set up for shade.

Shirts/Swag: I once saw a pie chart showing the percentages of the “reasons” people choose a race.  Approximately, 35% chose the race based on the location/scenery, while another 35% chose based on the bling.  Unashamedly, I fall more into the latter category, so I was disappointed to find out there was no swag nor bling at his race.  However, the other part of me falls into the former category (Hawaii here I come!), so I was completely happy and satisfied with what the race had to offer.  A shirt was given to participants, and I must say I do like it.  It is a nice tech fabric and color.  I am perplexed however, why there is no plane on the shirt. Anywhere. Weird.

Overall, I recommend this race.  I probably wouldn’t travel to it, but as a locally run race it’s a good one!

Maverick (and I) gives it four out of five thumbs up: